Labor is abandoning its support for Israel

23 Oct Labor is abandoning its support for Israel 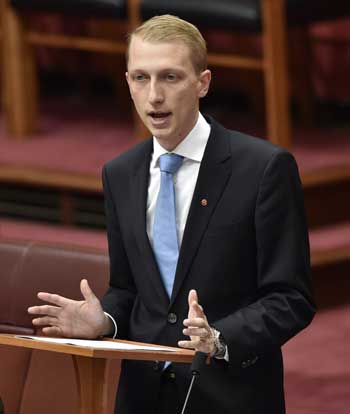 The South Australia Labor party conference unanimously supported the unilateral recognition of Palestine – becoming the sixth state-level ALP branch to do so.

It is now only a matter of time before the national conference follows suit and the ALP weakens its long held support for a two state solution – which unilateral recognition undermines.

There remains some honourably pro-Israel stalwarts in the ALP – particularly in the Victorian branch, where the likes of Melbourne Ports MP Michael Danby have been fighting a rear-guard action against moves to weaken Labor’s support for Israel for many years.

But there’s little backbenchers like Danby can do when they’re up against an alliance of nearly every state ALP branch and a collection of party luminaries that includes former prime ministers Bob Hawke and Kevin Rudd, and former foreign ministers Gareth Evans and Bob Carr.

In the lead up to a similar motion at July’s NSW state conference, Danby rightly took to the pages of the Australian Jewish News to denounce Bob Carr for “his obsessions about unilaterally recognising ‘Palestine’”, before claiming that “Senior Labor leaders will ignore him in office.”

But even with the aid of Bill Shorten’s personal intervention, the dwindling pro-Israel elements in the ALP were only able to slightly water down the NSW motion to one that Carr nonetheless proclaimed as “an historic shift,” that “would have been hard to imagine… three years ago.” Another proponent of the motion, NSW upper house Labor MP Shaoquett Moselmane, went further by calling it “a historic win for the Palestinian people.”

Danby response was an attempt to ignore the obvious, with a full page ad in the Australian Jewish News denying that the ALP’s position was shifting. The ad contained a few quotes from senior Labor MPs claiming that the party’s national policy towards Israel hadn’t changed – a rather hollow response given one of these MPs, deputy leader Tanya Plibersek, has previously denounced Israel as “a rogue state” and called then prime minister Ariel Sharon a “war criminal”.

Since that fateful ad a further two state branches have passed motions to calling on a future ALP government to recognise Palestine. This means similar motions have now been passed in NSW, Queensland, Tasmania, South Australia, Western Australia, and the ACT.

For his efforts, Danby has come under increasing pressure to retire at the next election.

Even if Danby is able to stave off a likely preselection challenge, he will sadly be incapable of stopping the ALP’s drift away from Israel. And when the party’s national policy does inevitably change, Danby – and every other remaining pro-Israel Labor MP – will have no choice but to toe the party line. This is because the ALP’s binding caucus policy prohibits MPs from opposing party policy, regardless of their own personal beliefs. Members who attempt to flout this rule – including MPs – risk expulsion.

Labor’s shift away from Israel is no doubt motivated, at least in part, by the growing threat from the Greens.

The Greens long history of anti-Israel activism is well known. The NSW Greens passed a resolution in support of the anti-Israel Boycott Divestment and Sanctions (BDS) campaign in 2010. The Greens-dominated Marrickville Council was the first municipality in Australia to implement BDS – a position they only reversed after an intense public backlash. The NSW Young Greens appallingly boycotted the Australian Union of Jewish Students (AUJS). Last year Greens Leader Richard Di Natale shamefully launched a vitriolic attack on former Israeli President Shimon Peres during a Senate condolence debate to honour the Nobel Peace Prize-winning statesman.

Even in Danby’s own seat of Melbourne Ports – a seat that contains Australia’s second largest Jewish community – the Greens have re-nominated a candidate, Steph Hodgins-May, who boycotted a Jewish News’ candidates forum at the last election in part because it was co-hosted by Zionism Victoria.

Ironically, it was only with Greens preferences that Michael Danby won the seat of Melbourne Ports at the last election. And the only way the Greens could win it at the next election is with Labor preferences.

Australia’s Jewish community deserves representatives who will support Israel. It is becoming increasingly clear that the only party that can be relied upon to stand with Israel is the Liberal Party.

This article originally appeared on J-Wire.

Sorry, the comment form is closed at this time.